"Endowed with the strength of a rhinoceros, the speed and agility of a jungle cat and the intelligence of a garden snail, Thrud the barbarian is a mindless fighter who engages in mindless slaughter while remaining ignorant of plot points.

At the age of five, Thrud is sent to Crom the Destroyer Orthodox Pagan Infants School, where he towers above the teachers and his fellow students. When one of the children shoots him with a pea shooter, Thrud's reaction is to kill and maim twenty-seven pupils and three teachers, leading to his expulsion from the school. Choosing to return to the wilderness rather than his adoptive parents, Thrud lives alone until, one day, he stumbles across a hidden burial chamber. Finding a small helmet and a large axe, Thrud arms himself. Finding gold and gems, he decides to return to civilisation with his newfound wealth, quickly establishing himself a reputation as a violent warrior."

I've had this model for a while now, still not sure what to use him as, probably as a spawn of Chaos or a Chaos troll to represent his stupidity. Decided to paint him up for a painting challenge, which I´ve now forgotten which one it was, fitting for this model I would say. 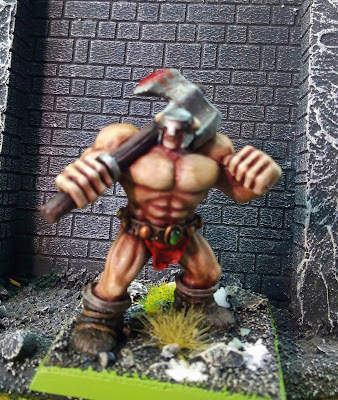 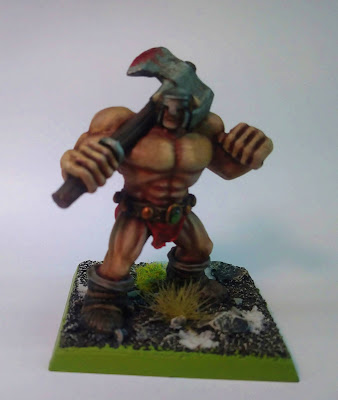