Oerl the Young:  When the Bearmen were beset by a horde of Orc raiders, many were undone by the craven beasts' black arrows before Beorg strode forth and snapped the Orc chieftain's neck like a twig. During the battle, a young Marauder known as Oerl the Young was caught in the eye with a Goblin's arrow, leaving a deep scar riven across his face. Yet despite his injury, Oerl had nonetheless kept high the banner of the Ursfjordings; the Bear of Urslo, the skin of a massive, Chaos touched bear that Bran, Beorg's father, had slain to celebrate his son's birth. Impressed with Oerl's courage, Beorg granted the warrior gold and an honoured place on the battlefield -- at his side. 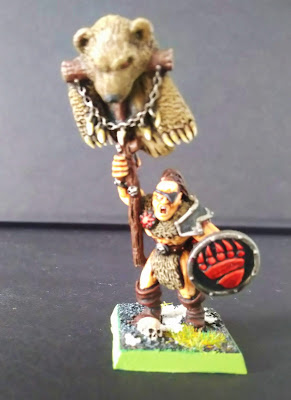 The Bear Banner: Beorg's battle-standard is borne by the hardy warrior, Oerl the Young -- an entire bearskin whose grizzly head leers out from the top. The skin is touched by the power of the Dark Gods, and the blessings of the gods is such that the banner radiates an aura of rage that drives the already fierce Ursfjordings into a terrible battle-fury that is impossible to contain.

Still working on some bearmen to finish of the unit before we start our 5:th edition Storm of Chaos campaign. the Bearmens banner is a magical banner which work as a light version of the Banner of Might, at half the cost it gives +1 to hit in the first round of any combat, I´d love this banner on a unit of knights, but it´s better than nothing even on a unit of infantry.
Upplagd av snyggejygge kl. 06:15